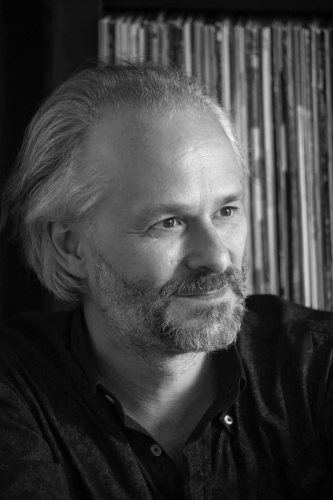 David Julyan has been quietly locked in a studio somewhere in South London, composing and constructing, an explorer in sound on the big and small screen since just before the dawn of the 21st Century. His collaborations with directors such as Christopher Nolan are ones that probably burrowed their way into your subconscious.

Focus in on the past: a dusty basement in enthusiastic disarray at the University College of London where a film society gave David access to a room full of equipment and some like-minded fledgling filmmakers. The experimentation and dreaming he had started in his youth here found a place to crystallise and grow. Although he studied physics and astronomy, his ambitions changed to a more creative focus. Self-taught he dabbled not just in film but in rudimentary scores and sound design. One such new friend and collaborator was Christopher Nolan, after working together on short films, both artists found their voices when Julyan scored Nolan’s first feature Following. This collaboration quickly led to the creation of some of the most praised films of recent years, including Memento and The Prestige. What became clear quickly is that Julyan was attracted to working with films that played with genre, broke or simply threw out the rule book. His music counterpointed these stories and he continued this journey with more directors, matching their energy of ideas Neil Marshall on The Descent, Drew Goddard on The Cabin in the Woods and the Duffer Brothers film Hidden.

His palette of sound is indebted to warm synthesizer drones, searching strings and often a simple pulse or digital heartbeat as well as fragile, perfectly-placed piano notes and chords. Never too much, always just enough – music made of instinct and intelligence. In a respite from the screen in more recent years he has left his studio and drawn inspiration through live performance at the gothic amphitheatre of Union Chapel in London. These forays into performance have given him a sense of freedom which has encouraged him to collaborate with himself for the first time! His first solo music is built on a system of restrictions and rules which takes as its starting point a duo of idiosyncratic synthesisers, the piano and the soulful string-playing of Iskra String Quartet, weaving melodies, sounds, themes and ideas across a soon to be released album.